The launch of a new agricultural robot now seems like an almost monthly event, with universities, manufacturers and inventors around the world tasked with replacing people with autonomous machines.

The problem with virtually all of these cutting edge, high tech projects is that they are just in the design or testing stage – five or ten years from commercial reality. But there are some exceptions, and it’s no coincidence that two of them come from the same shores.

The first is Agrointelli’s Robotti, which was developed by a team from the east coast of Denmark. 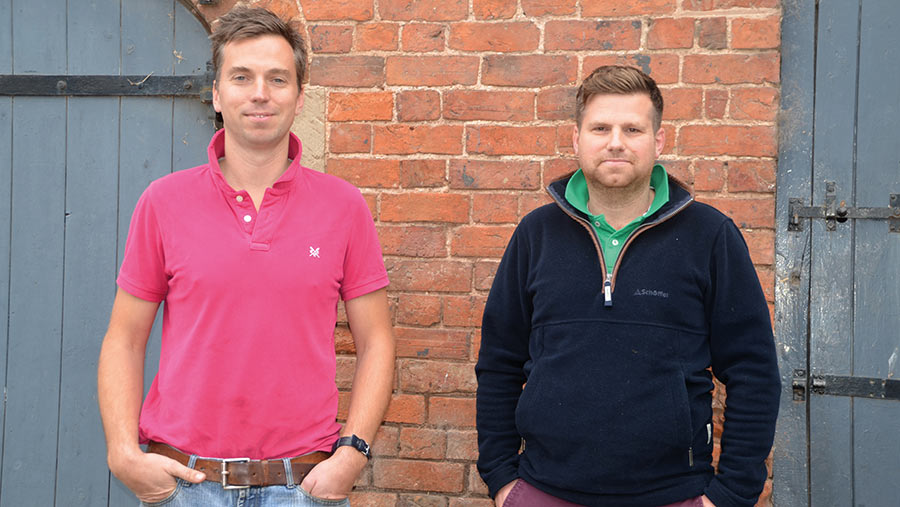 A completely unmanned unit, it uses diesel engines to provide power and can carry conventional implements on its three-point hitch. Earlier this year, Suffolk vegetable producer Home Farm Nacton took delivery of the first Robotti to arrive in the UK.

Danish farmer brothers Jens and Kristian Warming took a slightly different approach in developing their Farmdroid concept – a dedicated sowing and weeding robot capable of accurately sowing and then hoeing on subsequent passes.

It runs on solar power and is completely self-contained, using RTK-corrected GPS signals to record where each seed is planted, rather than complicated weed-identification camera technology.

In subsequent weeding runs, it knows what is a crop and what is not, just by its location and without the use of cameras or sensors. Its electronically controlled blades then work the soil, both between the rows and within the rows. 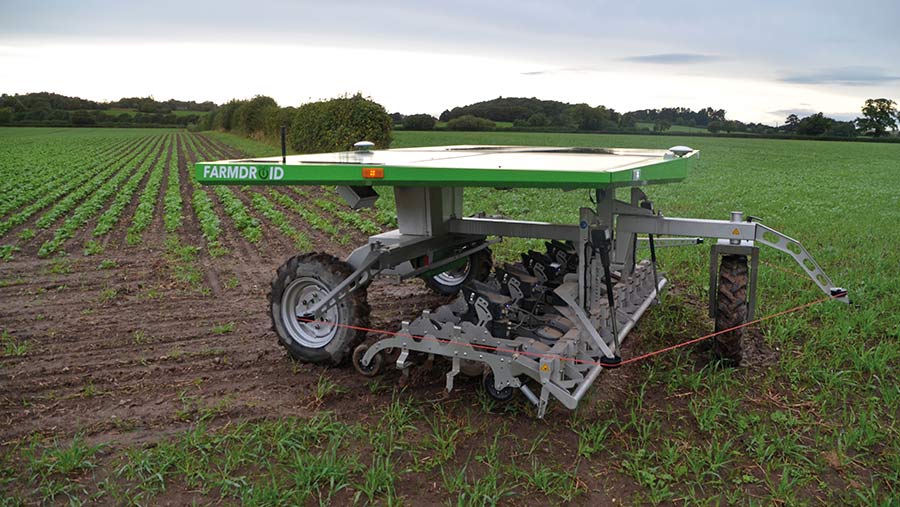 The simplicity of this approach has brought it to market relatively quickly compared to the very complex robotic weed-hunting systems currently being developed by the big players. To date, over 160 Farmdroids are working in Denmark, Germany and now the UK.

In early June, the first arrived in Shropshire at the Brettell family’s organic farming business.

“While working on rotary harrowing this spring, I had plenty of time to think about ways to improve our approach to beet establishment and weed control,” says Chris Brettell.

“After a bit of internet research, I came across a video of how Farmdroid works. I knew right away that this was what we needed. I loved that being powered by solar means it’s completely self-sufficient in energy and the simple approach of recording where the seeds are planted allows it to weed precisely between plants. grown in row.

Two months later a lorry pulled up in the yard carrying the UK’s first Farmdroid. Halfway through containment, it was up to the Brettells to get the unit going on their own. But with the advice provided over the phone from Denmark, it turned out to be a surprisingly straightforward task.

Initially, it is transported to the target field and around the boundary on its three point linkage, allowing it to register the shape of the field and allowing the operator to grasp any obstacles. All this is displayed visually through a smartphone application, where it is possible to change the position of the geofence. Then, just fill the seed drill hoppers with seeds and press the “Go” button.

“It was strange to see him go alone for the first time, doing six turns of the headlands before embarking on the long work.

“It was quite remarkable that within hours of being here it was up and running. The calibration was very straightforward, and at a basic level this is one of its biggest plus points – the sowing units are super simple.

“Rather than using a vacuum cleaner, a shutter opens and closes at regular intervals, which allows for very precise spacing. This is the best singularity I have seen of any precision drill.

With its own RTK base station, the GPS-guided machine can record exactly where it places each seed. Because it operates at such a slow speed, it is able to achieve precision levels below 1cm.

This is essential to allow it to do a decent job in subsequent weeding passes. Between each row of crop, arrow-shaped teeth cut off any weed growth like a cheese wire – it’s basically a super-flat inter-row hoe.

Smart bits are the solenoid operated in-line weed killer blades. These move in and out between the recorded position of each cultivated plant, thus removing weeds that are growing where they shouldn’t be.

One of the great advantages of using the approach of recording plant positions rather than weed detection camera technology is that the Farmdroid can go straight to weeding work as soon as it is finished sowing. .

He does not need to be able to “see” crop rows or weed seedlings. By starting the weeding process at such an early stage, it ensures that they don’t have the chance to establish root structure. 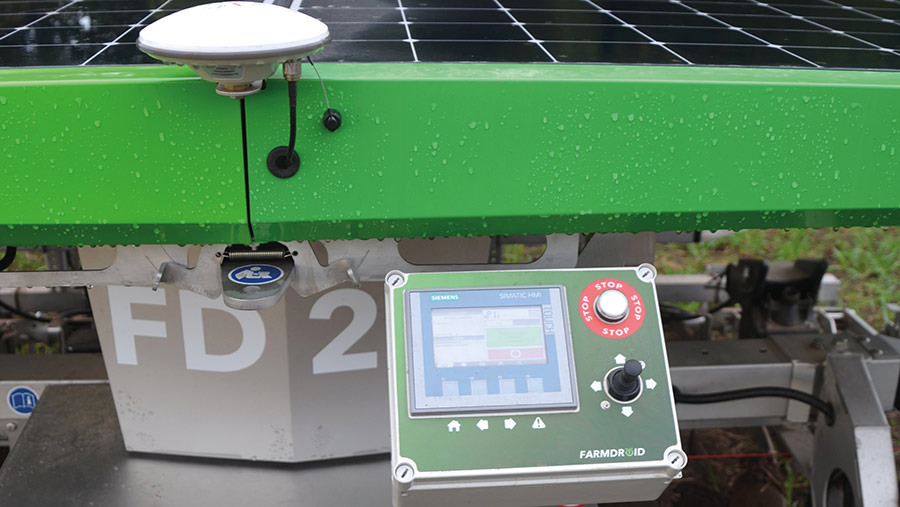 How fast is it spinning?

In drilling mode, the six row Farmdroid will typically travel at 500mph. It then increases the rate between 650 and 800 m / h during weeding.

What is the battery life?

Because the Farmdroid’s solar panels recharge the batteries as it goes on, it can run pretty much indefinitely – as long as it is sunny.

The company says most units working primarily in spring crops will work an average of 20 hours a day. The closer to June 21 you get, the longer the working day, and he may only need a single hour of rest in the middle of the night.

What crops can it sow and weed?

It was originally developed by the Warming brothers for sowing and weeding sugar beets, but growers of alternative crops quickly saw its potential and put units to work in onions, herbs, and salads.

This high-value, labor-intensive product is considered to offer the greatest opportunity, but the Danish company is working on versions for more common crops.

A machine with 12 rows spaced 22.5 cm apart has been developed for cereals, although it is limited only to inter-row weeding rather than in-line work. There’s also a coarse-seeded version with wider row spacings in the pipeline that should be able to handle corn, beans, and even peanuts.

This season, Farmdroid also worked with a high-profile player to test a bolt-on sprayer that could be used to make spot applications of herbicides, fungicides and insecticides. Early reports suggest that such a setup could potentially reduce the use of agrochemicals by up to 90%.

How do the numbers stack up?

The Brettells know this all too well, having had to walk through their organic forage beet crops several times in an attempt to control weed growth.

“Even with Garford’s halfpipe discs working through the crop ranks, we would have a hard time really keeping the big hen under control, so not only did we have the cost of multiple hoe runs, but we often had to fend for it by hand at a cost of £ 100 / acre, ”says Ed Brettell.

“The Farmdroid solves these problems because it is able to work within 5mm of each beet plant between the rows and 20mm in the row.

“Not only are we saving on grubbing and weeding, but there has been a marked increase in yield. At the end of the season we can see a huge difference in root size – where previously we got 50-60 t / ha, now it looks more like 80-100 t.

What are the disadvantages ?

“Honestly, it’s hard to think of a lot of negatives,” Chris says.

“Obviously, with no one at the helm, it’s very reliant on GPS, and if it breaks down it will stop. So, when setting up the fields for the first time, you need to give the trees a very wide space to avoid “satellite shadows”.

“The other potential drawback is the slowness of the work during the drilling. If you’re faced with it because the weather is getting closer, the pace of 0.2 ha / hr can cause frustration and unfortunately you can’t just go with a tractor-mounted drill to push, because the robot has so won I don’t know where each seed is placed for its weeding passes.

“Since the Farmdroid arrived in the middle of the lockdown and we didn’t have anyone on hand to help us set it up, we were impressed with its ease of use and the backup we’ve had over the phone since. Denmark, ”says Chris.

“Since then, it has worked flawlessly. If it needs a software update, it will do it itself and continue with the job.

“Granted, it was late in the season when he arrived, so we only had 2.5 ha of beet to sow, but it was the perfect testing ground. We have since put him to work seeding and weeding an additional 2.5 ha of turnip stubble, which he has done without a problem.

“Next year we’re going to try to get him to make our entire surface beet fodder. That’s double the 20ha recommended by Farmdroid, but we’re confident it will achieve it based on this year’s performance.